Company of Heroes APK is a large-scale strategy game, highly customizable to bring players the fierceness of the battlefields of WW2.

Events in the history of the world are often excellent subjects for the development of a multitude of different game genres, such as simulation, action, adventure, and strategy. Especially World War 2, a significant event of the world, an event was originating from the clashes of the West countries. However, when it comes to one of the most authentic games of WW2 battlefields, it is necessary to mention Company of Heroes. It’s a real-time strategy game, it has been released on other platforms, and soon it will be available on mobile platforms with gameplay and features compatible with that platform. When coming to this game, players will experience controlling a vast battlefield, with many famous campaigns, as well as challenging their tactical skills. 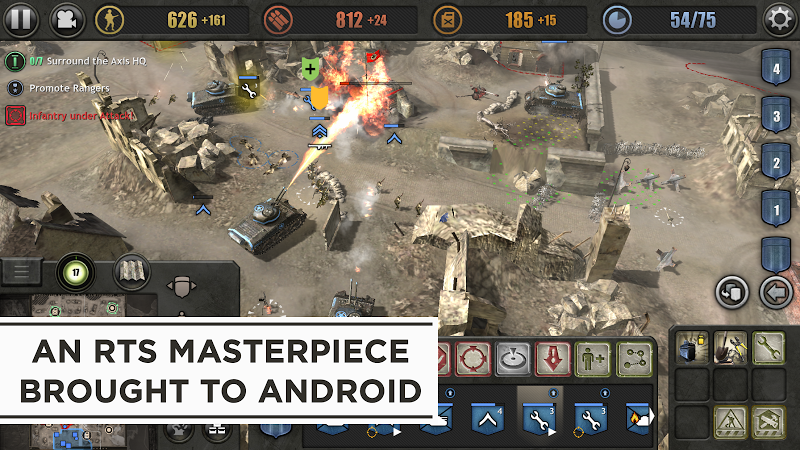 Upon arrival at Company of Heroes players will be welcomed to a vast campaign series, built on top of the famous WW2 event venues. However, the game only has The Allies campaign, along with maps designed based on the battlefields that the Allies have participated in. During the progress of the campaign, players will face many different challenges, and they are built with a separate map, with many special objectives for players to experience. Of course, the campaign will also bring players new things for the real-time strategy genre, such as scripted-scenarios and many unexpected events in the plot. 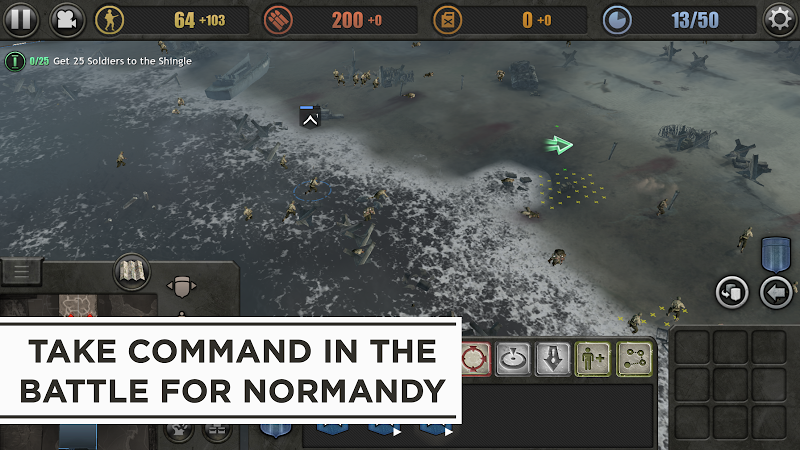 CONTROL YOUR TROOP THROUGH REAL-TIME

In each campaign, players will control an available army to complete many goals and missions. All activities of the campaign will be shown through a top-down perspective, along with many features that help players keep track of the battlefield more easily. Of course, during combat, players can replenish forces, resupply, and control multiple units at once to create an actual battlefield. Players are acting as a general so that they will control many different types of units on the battlefield. Not only that, but the player must also know how to coordinate the units together, for them to maximize their effectiveness, as well as to minimize casualties on the battlefield. The game will also have many special functions, such as calling for artillery support, aerial support, and many more kind of support on the battlefield. 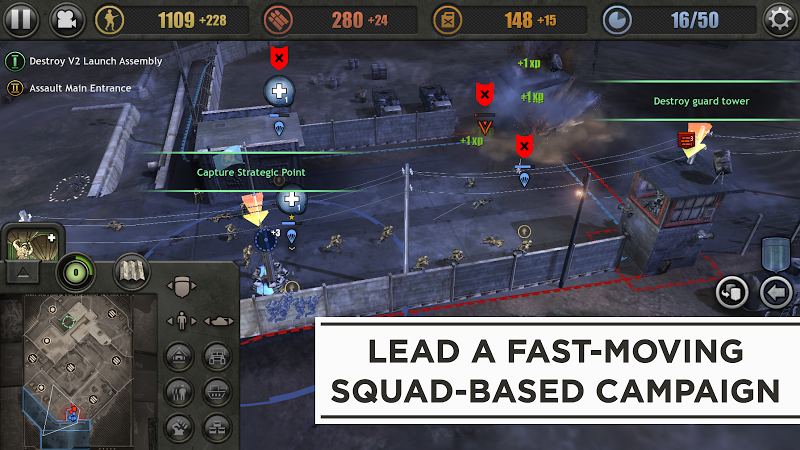 AN INTUITIVE INTERFACE DESIGNED FOR MOBILE

Company of Heroes is a real-time strategy game with complex gameplay and lots of things for players to learn. However, with a specially designed interface for mobile, things will be different. Players will easily control each unit, command them, along with many other options to move on the battlefield. Not only that, but the player can also easily switch between different units through the functions available on the screen. Even the player can expand the activity of a unit by tap and hold, a circle with multiple commands will appear immediately. The console can also be expanded with more advanced functions, which brings an authentic experience on a WW2 battlefield to the player. The game has many things for players to research and experience, and through the tutorials along with the game’s interface, everything becomes simpler than ever 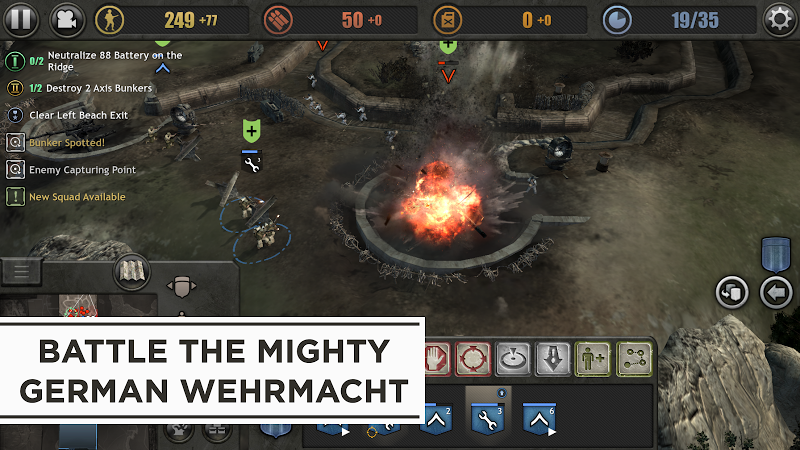 VARIOUS UNIT AT YOUR DISPOSAL

Company of Heroes will bring players many famous campaigns that appeared in WW2, so it will build up each challenge’s progress in a surprising way to entertain players. In each challenge, the game may limit the number of units a player can control, as well as assist the player with many special equipment and vehicles. If the player completes the objectives of the challenge, they can unlock advanced functions such as production, and endless reinforcements. Besides, while fighting, the player can research and upgrade the army directly, thereby helping them go further on the battlefield and improve fighting efficiency. The game will bring players all the famous units that appeared in WW2, along with unique details that make the tactical element clearly emphasized. 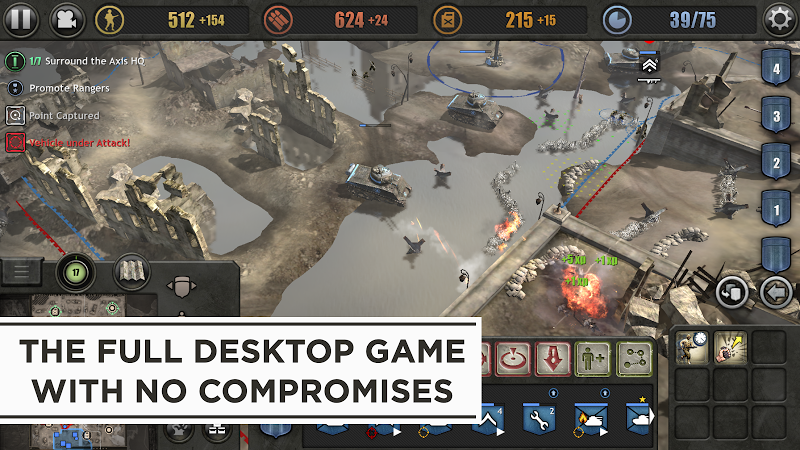 Unusual real-time strategy games that leave an impression on players in their gameplay and features, but the new graphics are what makes the game stand out and entice the player. Of course, Company of Heroes when coming to the mobile platform will introduce players to advanced 3D graphics, simulating battlefields and buildings in the most realistic way. Not only that, but the visual effects will become eye-catching and easily make an impression on players, bringing a real WW2 battlefield feeling. Besides graphics, players can enjoy the best soundtracks and music with war-themed, stimulating the sense of the player and bringing many new experiences when enjoying the game.

On the PC platform, Company of Heroes is considered one of the most popular real-time strategy games, as it gives players famous WW2 battles along with attractive gameplay to entertain. Because of that, the appearance on mobile has also attracted a lot of attention from players and promises players to become one of the best real-time strategy games. If you are a lover of the modern strategy genre, with WW2 context, along with a massive series of campaigns, then this game will be one of your favorite games upon release. 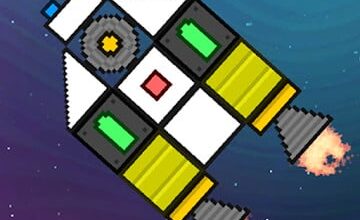 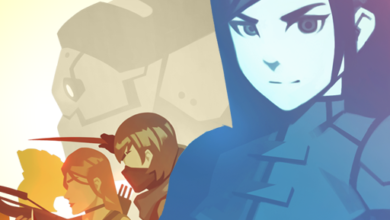 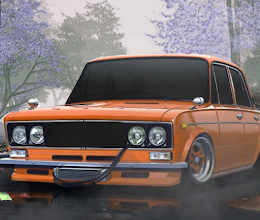 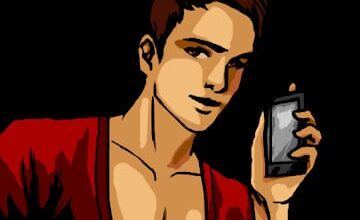 Boyfriend Plus v0.5.6 MOD APK (All Unlocked) Download for Android